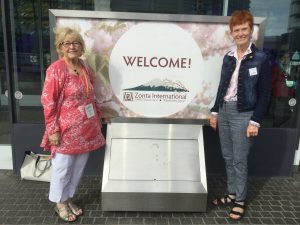 Service: “Zonta’s service programs reflect on and enhance our mission”
• Liberia Fistula:
1,500 women and girls received surgical treatment; 384 women and girls were reintegrated into their communities and trained to become financially independent; new fistula surgeons were trained.
• Let Us Learn Madagascar:
13,185 girls are directly benefiting; new classrooms were built; catch-up classes were offered for out of school girls; teachers were trained; mothers were supported with cash transfers.
• The Future We Want in Nepal:
600 women completed vocational skills training; women now comprise an average of 47.5% of decision-making positions; advocacy activities addressed genderbased discrimination; women at risk of trafficking or unsafe migration were equipped with prevention tools and support.
• Respecting the Rights and Responding to the Needs of Adolescent Girls in Niger:
Nearly 42,000 adolescent girls enrolled in mentorship programs; 420 safe spaces were created; a new National Gender Policy was developed; 100 adolescents received training in vocational and technical skills.
International President Sonja also mentioned a number of local service projects from clubs around the world.
“Zonta says NO to Violence against Women” will continue and include “ending child marriage” with the joint UNFPA-UNICEF Global Program to Accelerate Action to End Child Marriage.
Another Program Innovations include “U-Report mobile platform system” used by the Global Program in Mozambique, Sierra Leon, Uganda and Zambia. It is used by over 470,000 users aged 10-24. The Government of Bangladesh (started in 2017) launched a multimedia campaign, with theme “Raise the Beat for Ending Child Marriage” with short films on UNICEF’s social media platforms, and engaged more that 15 million people, mostly adolescents. 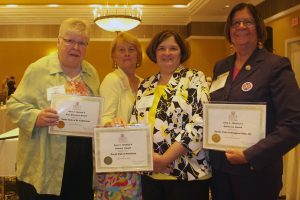 Janet Penny enjoyed an extensive weekend representing our club during the September 21 -24, 2017 conference. A focus on ADVOCACY gave our members insight and awareness into recent developments regarding CEDAW – The Convention on the Elimination of all Forms of Discrimination Against Women. CEDAW is an international agreement addressing human rights of women and girls which was adopted by the United Nations (UN) in 1979 and came into force in 1981. It provides a complete definition of discrimination and legally binds all parties that sign and ratify. It is interesting to note that seven UN member States have not ratified or acceded: Iran, Somalia, Sudan, South Sudan, Palau, Tonga and surprisingly the United States. Obligations include: end all forms of discrimination against women; incorporate equality in the legal system, end discriminatory laws and adopt laws promoting gender equality; establish institutions to ensure effective protection of women; ensure private persons, groups and enterprises promote and protect women’s rights.
CEDAW in Canada: The Canadian Government accepted 34 of the 38 UN recommendations but unfortunately disagreed with the UN report that Canada has committed a “grave violation” of rights to aboriginal women by failing to promptly and thoroughly investigate the high levels of violence they suffer including disappearances and murders. Decades of government changes and cuts have eroded women’s rights under CEDAW in Canada. Our country has fallen from 1st to 25th place on the UN Gender Inequality Index. There is much work to be done. 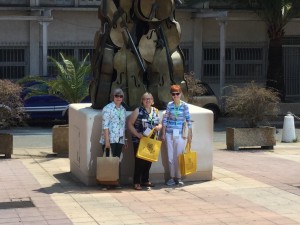 Club delegate Virginia Vickers was one of more than 2,000 Zontians attending the 63rd Zonta International Convention Nice, France 2 – 6 July 2016. The theme – Empowering Women – TOGETHER! – could be felt throughout the Acropolis Convention Center as attendees reconnected with friends from across the globe, engaged in stimulating workshops and celebrated the rich history and bright future of Zonta International.

From September 25th to 27th, 2015, Zonta Club of St. Catharines delegate Janet Penny took part in important elections, committee and area reports. Much discussion and sharing of ideas ensued that will impact our district clubs from 2016 to 2018. We are delighted that a very successful Birthing Kit project will continue as a District 4 service project. 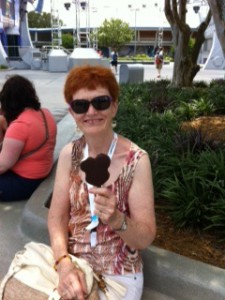 After much hard work, Zonta Club of St. Catharines delegate Virginia enjoyed a Disney treat. It wouldn’t be a Florida Convention without Mickey.

In June 2014, Zontians united internationally to foster high ethical standards, to implement service programs, and to provide mutual support and fellowship for members who serve their communities, their nations, and the world. Going to a convention ensures you will always meet new friends, have a great sightseeing adventure and time to relax. On the business end, members take part in elections, make important decisions regarding club bylaws and resolutions, attend informative workshops and learn about Zonta’s important service objectives for the next two years. Zonta International and ZISVAW services projects for this biennium include:
– Eliminating Obstetric Fistula in Liberia
– HIV Free Generation in Rwanda
– Gender Responsive Schools in Vietnam
– Delaying Early Marriage in Niger
– Voices against Violence in 12 Countries
With the theme engaging and informing every member about local and international service projects, participants were stoked to share these experiences with their club and in turn motivate and empower their fellow members. Let’s go Zontians….power together makes change. 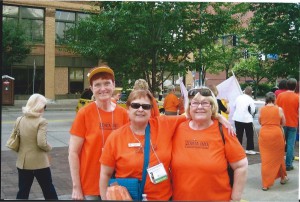 Virginia, Katherine and Margo abandoned their business attire to join the Orange Army! Over 100 Zontians marched to raise awareness of the need to eradicate violence against women.

Three members of the Zonta Club of St. Catharines attended the District 4 Conference from Sept. 27th to the 29th, 2013.  Members from 39 clubs from Ontario, New York State and Pennsylvania gathered to discuss and make decisions on the organization’s future path. It’s a wonderful opportunity to meet outstanding women from both sides of the boarder as well as enjoy the sights and sounds of Pittsburgh. 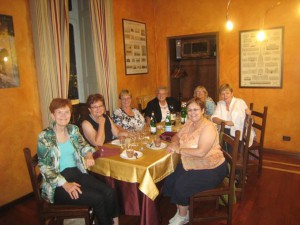 Four of the members of the Zonta Club of St. Catharines attended the 61st Zonta International Convention in Torino, Italy from July 7th through the 12th, 2012.  The convention brings together members from clubs around the world, both new and old.  These conventions are an opportunity to meet new people and hear new ideas as well as renewing old friendships.

The convention was exciting as a new international board was elected and many bylaws and resolutions were discussed and passed.  The members hope that the work we do at the Conventions will keep Zonta more relevant than ever.  I think that the most exciting were the resolutions addressing a new phenomena, E-clubs.  As our home club now has a website, the concept of E–clubs is so very relevant.  We encourage people, both members and non-members, to check out Zonta International for more information detailing Zonta’s work, locally and internationally.